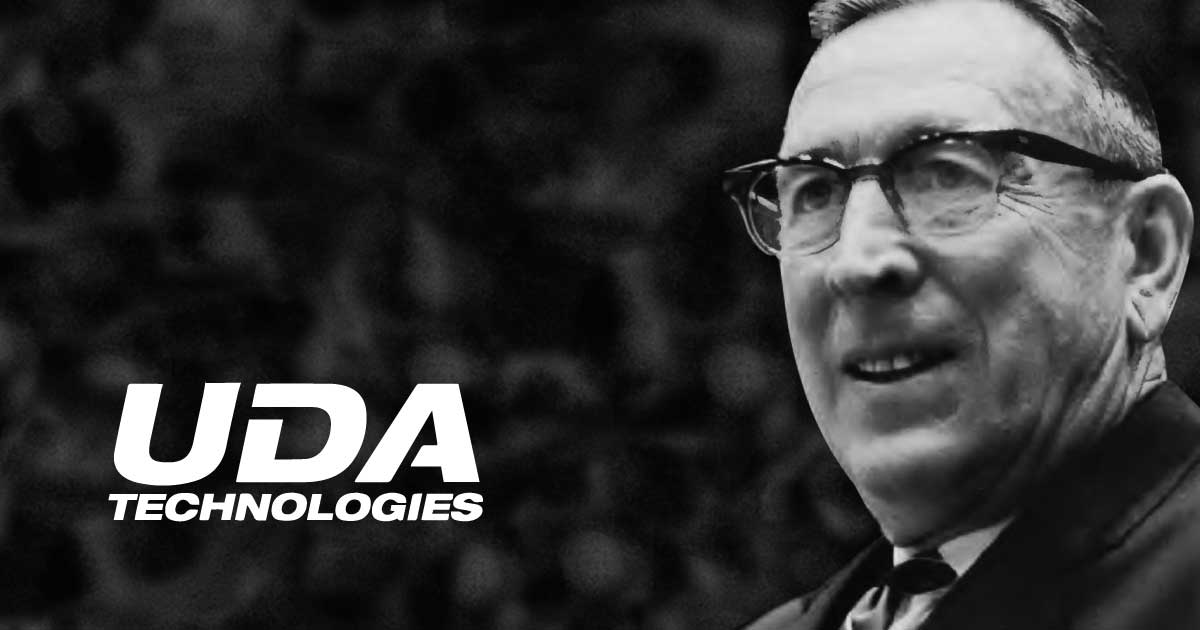 John Wooden is a legend. During his 12 year tenure as the head coach of UCLA’s men’s basketball team, he won 10 national titles, including a record seven in a row. To put this in perspective, no other team has ever won more than two titles in a row – including national powerhouses like Duke, UNC, and Kentucky. Wooden’s success on the court will long remain the gold standard in the basketball community, but outside the sports world, his legacy is the incredible leadership that he displayed and passed along to others.

In fact, we recently had a staff meeting at UDA where we discussed in detail the leadership advice that Wooden preached. Meetings like this happen periodically for our staff to grow and understand how to best lead and service our clients as well as the new talent we are constantly bringing on board. Here are some lessons we took away from “The Wizard of Westwood”:

1. Build a Shelter against a Rainy Day

Prepare for the unexpected. We all have our own version of a “Rainy day” – losing a job, a surprise lawsuit, replacing a car – they hit us out of the blue and can leave us scrambling for answers. Your best defense is to operate in such a way that you have prepared for the worst, even when you’re at your best. Run your company in such a way that you give yourself a financial or operational cushion so that you can be flexible if when a rainy day hits.

In today’s world, everyone is looking for something to do their jobs for them. Accountants want programs to file taxes for them, baristas want machines to make their coffee, and builders want software to run their businesses for them. But if programs are doing your job, why do they need you? As Coach Wooden says, “If you spend too much time learning the tricks of the trade, you may not learn the trade.” Software, programs, and other automations should be used as a compliment to your knowledge - not as a substitute for it.

You’ve heard it a million times: Rome wasn’t built in a day. Just because it’s not new doesn’t mean it’s not true (that has a nice ring to it, right?). Nobody loses 100 pounds, develops a groundbreaking technology, or becomes a professional athlete overnight. UDA was founded in 1999 and has taken step after step in the right direction (and some in the wrong) to get to where we are today. There are hundreds or thousands of small successes that all contribute to make the big things happen. If you do the little things right, and get a little better at them every day, one day you’ll wake up at your destination.

Over your life and your career, there will be plenty of things to complain about. You will fail often, sometimes more often than you succeed. Failure itself isn’t problematic – it’s every rung on the ladder to success – but if you focus on that failure and let it consume you, the ladder gets harder and harder to climb. It’s easy to complain about the things that go wrong or that we don’t like, but don’t let that get in the way of recognizing your accomplishments. Celebrate the good things, no matter how small, and you’ll find that there are more good things than you may have realized.

The life and legacy of John Wooden is one that will remain a topic of conversation for decades even in his absence, because he was not only successful, but he was great at teaching others how to be successful. At the heart of it is the mantra to give it your all, improve every day, and if you want to be the best, you’ve got to outwork the rest. We carry these lessons in our culture at UDA, and we believe our clients should too.

Over 850,000 pros worldwide manage jobs worth more than $85 billion everyday with ConstructionOnline.

Get it in writing - with dozens of proposals, contracts & reports.

Turn your data into documentation with ConstructionOnline